In the early eighties we travelled to India to film the great Indian festival The Kumbha Mela on the banks of the Ganges River in the state of Hardwar. This extraordinary event is held every twelve years and is the biggest gathering of humans at any festival on the planet. During the month long celebrations up to twenty million people, many of them pilgrims, attend the Kumbha Mela festival. With so many Indians it’s very rare to see western tourists amongst the crowded streets or along the riverbanks. 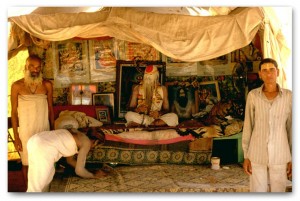 The temperature during this festival was consistently around forty degrees and the dry desert wind added to the intensity of the heat. Late one afternoon after a days filming with the Saddhus – the holy men of India – we noticed a man standing very still not far from us, as if just observing or waiting for us to catch his attention. He appeared of western origin but, on closer observation, was more Eurasian in appearance. He was impeccably dressed, most unusual considering the dust and extreme temperatures. He emitted an unusual coolness and calmness about him. We were staying in a small garden hotel about twenty minutes drive from the centre of the festival activities, a great respite considering the vast number of people and conditions surrounding the festival. We hailed a taxi and, as we were leaving, asked if we could give our newfound acquaintance a lift to wherever he was staying. Coincidentally, he happened to be staying at the same hotel. The late afternoon light was golden and almost immediately when he entered the taxi, he turned and said to me: “You shall be known as Jyoti” – a name I had not heard of before.

The days at the festival were full of wonderment and excitement. The energy levels were very high, as all who attended were there for spiritual nourishment, and the vibration amongst the pilgrims and the hundreds of thousands of Saddhus was magnified by the presence of so many people. As each day passed and moved closer to the full moon day of blessing, that energy intensified. 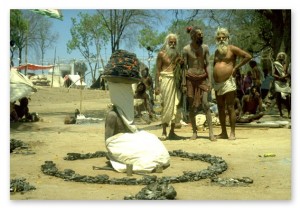 We arrived back at the hotel and our friend thanked us and disappeared. That evening when we went for dinner, we noticed he was sitting in the garden and asked him if he would like to join us for dinner. He politely accepted and, as we were the only guests in the hotel, the friendly kitchen staff served us a beautiful meal.

It turned out that he was a healer and when asked where he lived, he was dismissive and replied that it was somewhere in the mountains. He also seemed to know about my brother’s acute back problems and, after an enjoyable meal and evening, he suggested that he would do some work on my brothers back.

The next day we headed back to the festival. Our friend had checked out early and we never sighted him again. We filmed the Kumbha Mela festival for another two weeks until the climax of this great event and went back to Australia.

Sometime afterwards I was in The Theosophical Bookstore in Sydney, browsing through their vast collection of spiritual books, when I noticed a shelf with a number of deep blue covered books. Drawn to these books, I began to browse through the collection and bought two books: The Light of the Soul and A Treatise on White Magic, by Alice Bailey. When reading The Light of the Soul, I came across the word Jyoti – which means “Light of the Soul”. Several years later I joined the Arcane School founded by the Lucis Trust, publishers of the Alice Bailey books.

Shortly afterwards, we found ourselves in a valley in Tibet, filming the Wesak Festival – the great Buddhist festival near Mt Kailas, in the western region of Tibet. Near Mt Kailas is the sacred Manasarova Lake, the highest freshwater lake in the world. The name means “the most beautiful of lakes”. Manasa means “created by the soul” – for the lake was created by the soul of Buddha. At the edge of the lake on a small mountain lies a temple, the only building in the vicinity. As we walked up the incline towards this small and remote temple with a spectacular view, my brother said that this was the home our friend at the Kumbha Mela described to him as he was doing the healing work on his back. These were the mountains he referred to when he said that he lived in the mountains.

There are no coincidences in life; things are as they are meant to be. It is often only afterwards, when we reflect back on experiences, do we realise that the great unseen hand that guides us along the way sees all and knows all, and life – all life – unfolds as part of a great plan – a plan that we are all deeply connected to.

3 Responses to The Great Unseen Hand