“On the earth is love and in the heaven is love, and this – the love which makes all things new – must stand revealed” 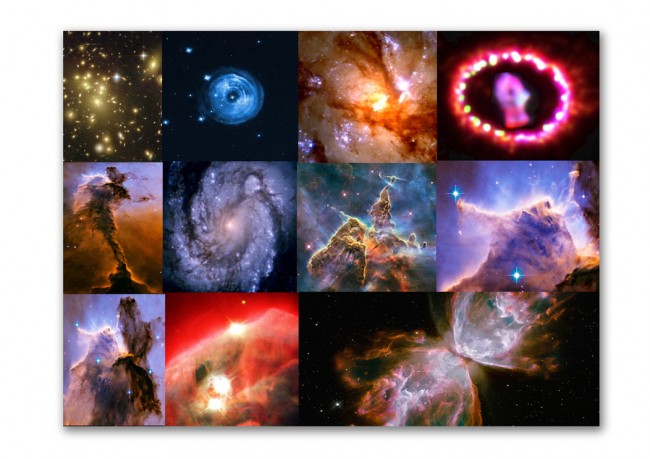 After data from the Hubble HUDF images was considered, it was estimated that there are more than 200 billion galaxies in the “observable” universe. Galaxies range from dwarfs – with as few as ten million stars – to giants with a hundred trillion stars each orbiting its galaxy’s own centre of mass. For a fly through click on this link: http://www.geek.com/science/astronomers-create-3d-fly-through-of-hubble-ultra-deep-field-image-1568596/

That’s a whole bunch of galaxies and a bigger bunch of stars. But, so much for galaxies and suns. How about planets? It is estimated that most suns have “planets” which, bound in their gravitational field, are circulating around them. Just what constitutes a planet is a matter of discussion within the astronomical community. Currently, for example, because of the size and some other dense physical attributes, the International Astronomical Union “recognises” a measly eight planets in our local solar system. Many scientists disagree with this opinion which actually reduced Pluto from planet status to, I don’t know, a really “Big Rock”. Also realise that these eight planets, and all the other heavenly bodies our astronomers have catalogued in the great out-there, include only those that our present dense physical instruments can “see”. Since the Etheric dimension of Cosmos is not recognised as existing, the number does not, for example, include Vulcan and several other planets still very much in their etheric development stage in our Solar System.

We have as yet to develop instruments or technology capable of registering the presence of these planets. Of course, if one starts out wearing the blinders of believing that such things do not exist, the chance of “seeing” them is remote. Anyway, the point is that, given just the estimated number of galaxies and stars or suns which we can see, we could well run out of zeros before we approached the number of planets that our telescopes can find.

I have no doubt that we will, sooner rather than later, discover a planet somewhere in that vastness we call Cosmos that supports what we have arbitrarily decided is Life. But that is not really the problem. The problem here is that the Big Scientific Question “Is there Life in the Universe?” is actually based on an assumption that is an error. The error is the assumption that equates Life with dense physical form existence. Every definition of life that I have seen links life with form existence. For example, from Wikipedia “Life is the characteristic that distinguishes organisms from inorganic substances and dead objects.” “Inorganic” stuff is “dead”, but organic stuff is alive. Why this discrimination makes sense in terms of Life, escapes me. However, in order for Life to exist there must be a form. This is the problem that lies at the root of most of our scientific investigations. We keep looking for life in forms rather than reaching beyond forms into Life.

Actually, there is no form without Life! Life is. The visible Cosmos is the expression of Life. Life is Intention. Life is Nothing, but contains the inexhaustible possibilities of Everything.

For example, If we would shift this fixation of our focus on the dense carbon water based form that Life generates as it manifests through the idea of human on Earth and start looking at the living idea of a human being as an existing conscious intention or a principled, manifested kind of energy field, rather than some specific form, a universe of possibilities would open for us. The most immediate realisation would be that Humanity exists throughout Cosmos. Humanity is an Idea, a frequency of consciousness which is the medium through which intention moves into action or form. This is the eternal process of motion in Cosmos: Intention, Love or Consciousness, and Action or manifestation through intelligence. Moving the search from the form to the idea, of Human as an expression of Cosmic Intention, is such a tiny step, yet it opens the door to Infinity.

We will never be able to “see”, experience, or comprehend Life through the exploration of forms anyway, and this tiny step does not require cyclotrons or telescopes. Every human being is born with a physical sensory apparatus that will never be equaled by any human invented instrument or technology. Learning to use this “equipment” is what we are about. The “rewards” in terms of liberty, freedom, understanding and beauty are worth all the work.

Many times in this incarnation, while spending time in the High Sierras, I have had the experience of lying on my back at 9000 feet or so at 1 and 2 in the morning observing the tiny part of the one of those trillions of galaxies that I could see with my naked eyes – our galaxy, the Milky Way. I have watched constellations, the Great Bear, the Twins, wheel across the sky, seen “shooting stars”, once one that lasted 6 seconds, watched meteor showers, watched the sun rise and gradually drive out all the stars except Venus.

While awesome in a certain way, none of the above facts – experienced as numbers on paper, in books or on slides, concerning the sizes, and distance from Earth of the diversity and multitude of bodies in Cosmos – come even close to the impact of awe, the meaning and significance of the experience of being in a dense physical body lying on the top of one of the lower ridges in the crust of our tiny planet and registering Cosmos. I use the term registering because the experience involves so much more or our sensory apparatus than our eyes. One can feel, hear, smell and even taste Cosmos.

On several occasions, I have experienced, or you might say realised, that Infinity was right in front of me and all around me, that I was connected to it, part of it. And, though this is unthinkable, I was it. Difficult to express, but the role the heart plays in registering these kinds of experiences is significant. Somehow the Heart speaks before the mind/brain starts processing data.

These experiences have a way of imprinting themselves in consciousness, both as images of light and beauty and intense frequencies of joy and maybe once in a while, bliss. And they come back again and again with power and clarity during one’s trekking around in the mundane tasks of daily living, giving it a sense of connection and value and meaning that makes it worthwhile and joyful.

It is interesting to realise that while raking the leaves in the garden or shopping for groceries in the supermarket, or driving down the freeway, one is an inextricable part, not only of Humanity and the planet, but of the Infinite Cosmos. We are a part that for a very brief time – as time goes – just happens to be housed in a rather incredible space ship we call a body and focused for a brief moment in the act of raking or shopping or driving.

Deep within, we know that the Stars are always there … waiting for us to return.

The Universe is energy – all pervasive – waves of energy constantly radiating through space. Oscillating from here to there and from there to everywhere. Every thought that ever was and will be exists in that timeless space. We are that space and that space is us.

This entry was posted in Space, Spirit. Bookmark the permalink.

One Response to The stars are always there