The small crowd gathered in the foyer of the Bellingen Theatre, beneath photographs of Tibet and Timbuktu and images of the Dogon people, from Mali in North Africa. The watching eye of a golden Buddha head, Tibetan flags and homemade pastries helped set the scene for a night of transcendental music by classical Japanese flautist, Taro Terahara, and the fusion of Tibetan and North African rhythms from the band Tibet2Timbukt2.

The opening mantra from the exquisite voice of Yuki Tasogare, who played the tambura, along with Shen Flindell on tabla, formed a beautiful and unforgettable introduction to the evening. Her classical mantra set the tone for what was to become, not so much a performance by highly talented artists, but more a meditation that would be remembered long after the evening finished. 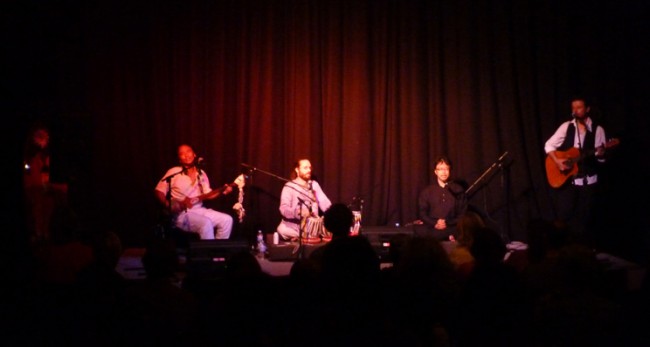 Following Tasogare’s delicate subtle chanting, classical flautist Taro Terahara performed what surely was one of the longest flute recitals of all time, producing a melodic and haunting sound that echoed to the deepest reaches of the mind. Taro has had many years of yoga training, which enables him to play the flute with such precision and beauty. His recital required a deep concentration on the breath – only a yogi with years of training and meditation could hold notes to such a degree of perfection. The ebb and flow of his breath and the sounds that followed transported the audience to a place beyond their normal day to day ponderings – to a state of deep meditation – where the mind resonates to the sounds of other worlds, far beyond the mountains of Tibet.

An intermission of chai and sweet chocolate macadamia brownies brought everyone back to earth, accompanied by an on-screen display of wonderful images of the Sahara Desert, the Dogon people in Mali and the sacred Mount Kailas in Tibet. When we resumed our seats, the performance of Tibet2Timbuktu2 began with a fusion of the best music from both worlds. 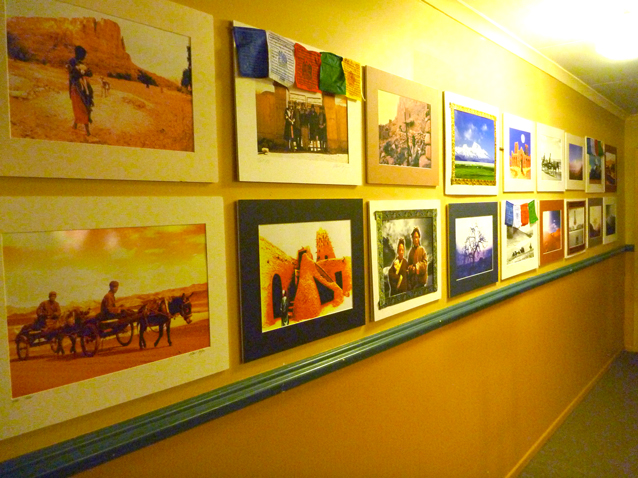 The band members Tenzin Choegyal, Marcello Milani, Shen Findell and Taro Terahara were in perfect harmony with each other, joking in a relaxed way about Karma and Lamas. Tenzing Choegyal, the lead singer, sang with such control and strength it was as if he was calling the spirit of Tibet into our presence. His voice was powerful and vibrant. In a spontaneous moment, Shen Findell, the tabla player, suggested to Tensing Choegyal that he might like to perform a tune he did some years ago in Japan, when he first met Taro Terahara. At first he seemed a little confused, as though he wasn’t sure – then, in a precise moment, he had the flute to his lips; for around 10 seconds, in absolute silence from the stage and audience, with one deep breath he sounded a note of such high key and beauty that he instantly transported everyone to a heightened state. It was almost as if Tenzin Choegyal was channelling this music from a master flautist somewhere in the mountains of Tibet. Along with the classical sound of Taro Terahara, they formed what was, for most in the audience, an exceptional musical experience. This unrehearsed flute recital was the highlight of the performance and, I’m sure, redefined the concept of flute music for an appreciative audience.

The evening ended with a Tibetan chant. The audience were asked to join in with the words “OM MANI PADME OM” – “the jewel in the lotus”. Softly they began the mantra, sounding it over and over, ending the show on a blissful note. An evening not to be forgotten. 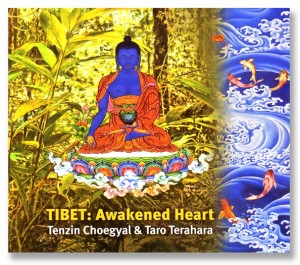 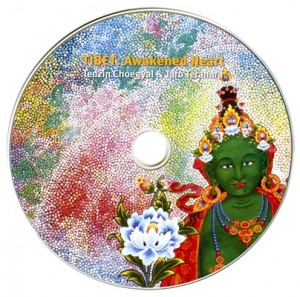 One Response to Tibet2Timbuk2 – Concert review