Resurgence Magazine – at the heart of earth, art and spirit
est. 1968 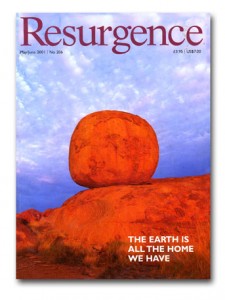 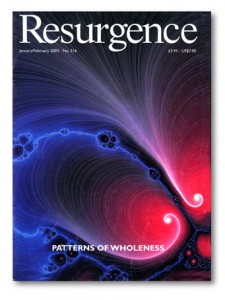 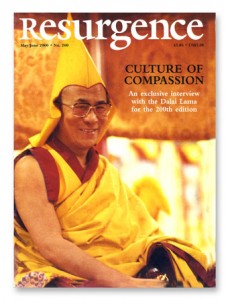 Resurgence Magazine, founded all those years ago, is a modern day classic. A magazine that promotes sustainable requirements for a world stretched to its limits. The vast knowledge and wealth of its contributors attest to the growing demands of a planet in crisis. Its content offers a way into a future based on understanding, co-operation, sustainability and compassion. Its pages are alive with art, nature, beauty and spirit. Its writers, from HRH Prince Charles, the spiritualist Deepak Chopra, environmentalist James Lovelock, US Congressman Dennis Kucinick and many other notable artists and writers, offer insights to expand consciousness and contribute a positive path to our future world.

It is highly recommended for your well-being and the contribution you can make to the planet. If you are interested in a sustainable, high-quality lifestyle for the future and a world that can offer this, a subscription to Resurgence will be the best investment money can buy.

“Resurgence presents a vision of a sustainable future where spiritual imperative and governance as a trusteeship work in harmony with each other.”
Satish Kumar

“Spirituality provides a new vision to free us from a reductionist and materialistic worldview.”
Satish Kumar

“The ‘holy life’ or ‘divine abiding’ is not some separate practice reserved for monks and nuns, but the necessary grounding for all our lives. Such a life is not in any way alien to us: on the contrary, it is, in the deepest sense, familiar to us, for when we live it we are most truly ourselves.”
David Cadman

“Another world is not only possible, she is on her way. On a quiet day, I can hear her breathing.”
Arundhati Roy

Life exists only through the gift of other lives: all life is interdependent. Existence is an intricately interconnected web of relationships. We share the breath of life and thus we are connected. Whether we are rich or poor, black or white, young or old, humans or animals, fish or fowl, trees or rocks, everything is sustained by the same air, the same sunshine, the same water, the same soil. There are no boundaries, no divisions, no duality: it is the dance of eternal life where spirit and matter dance together. Day and night, earth and heaven all dance together and wherever there is dance, there is joy and beauty.

The religion of materialism and the culture of consumerism which have been promoted by western civilisation have blocked the flow of joy and beauty. Once Mahatma Gandhi was asked, “Mr Gandhi, what do you think of western civilisation?” he replied, “It would be a good idea.”

Yes it would be a good idea because any society discarding spiritual values and fighting for material goods, going to war to control oil, producing nuclear weapons to maintain its political power cannot be called a civilisation. The modern consumerist culture built on unfair, unjust and unsustainable economic institutions cannot be considered to be civilised. The true mark of civilisation is to maintain a balance between material progress and spiritual integrity. How can we consider ourselves to be civilised when we don’t know how to live with each other in harmony and how to live on the earth without destroying it?. We have developed technologies to reach the moon but not the wisdom to live with our neighbours, nor mechanisms to share food and water with our fellow human beings. A civilisation without a spiritual foundation is no civilisation at all.
Satish Kumar

As I was reviewing the last ten years of Resurgence magazine – the number of years I have been on subscription – I was astounded at the number of high quality articles in every issue of the magazine. They are the type of story you would hope to read in the daily or weekend newspapers but never do – they are interesting, uplifting and give you a positive alternative to the fear and mayhem that most modern day media publishes. It’s like witnessing, and being part of, a new world in the making. Every story offers a world of beauty and infinite possibilities – hope and nourishment – inspiration.

Do we need God?
A response to Dawkins’ delusions.

A sense of Harmony
We are no longer dancing in tune with Nature’s rhythms.
H.R.H Prince Charles

Food Freedom
The idea of terminator technology is the ultimate instrument of food fascism.

“Seed freedom is the basis of food freedom. And it is by controlling the seed that the foundations of food fascism are being laid”

“The creation of seed monopolies, and with its massive unpayable debt, has led to a new species of money lender: the agents of the seed and chemical companies”

“An epidemic of farmers’ suicides has spread across four states of India over the last decade. According to official data, more than 160,000 farmers have committed suicide in India since 1997. That is a shameful indictment of unnecessary agribusiness practises that have been forced upon India’s farming community during the same period.

American based company Monsanto is attempting to dominate the world seed market.

It should be evident from the horrendous statistics regarding farmers suicides in India that the seeds being sown by multinational corporations destroy lives and livelihoods. Yet international policy continues to favour agribusiness, and the media and governments alike continue to turn a blind eye.”

“The ‘ecosophical’ outlook is developed through an
identification so deep that one’s own self is no longer
limited by the personal ego or the organism.
One experiences oneself to be a genuine part of all life.
We are not outside the rest of Nature and therefore
cannot do with it as we please without changing ourselves.
Life is fundamentally one.”

Living my Truth
Having resolved to live without oil for a one year, Mark Boyle discusses the impact that this had on his life and what the future holds for him.

Marvellous Microbes
From microbes to the human race, all organisms are equally evolved.

Islam and the Environment
All the evidence now points to the fact we are heading towards an environmental crises, HRH The Prince of Wales explains why we need to draw on the timeless wisdom of our sacred traditions – including Islam (the word ‘Islam’ means ‘Peace’ ) – to get back on the right track.

Many of Nature’s vital, life-support systems are now struggling to cope under the strain of global industrialisation. The problems are only going to get much worse. And they are very real. Over the last half century, for instance, we have destroyed at least 30% of the world’s tropical rainforests and in the three years since I started my Rainforest Project, over 30 million hectares have been lost – and with them about 80,000 species have disappeared.

When you consider that a given area of equatorial trees will evaporate eight times more rainwater than an equivalent patch of ocean, you quickly see how the disappearance of the rainforest will affect the productivity of the earth. They produce billions of tons of water every day and without that rainfall the world’s food security will become very unstable.

But there are other factors too. In the last 50 years our industrialised approach to farming has degraded a third of the Earth’s topsoil. We have fished the oceans so extensively that if we continue at the same rate we are likely to see the collapse of global fisheries within 40 years and then there are the colossal amounts of waste that pollute the Earth – the many dead zones where nothing can live, or those immense rafts of plastic that now float about in the Pacific.

These are very real problems and they are the clear results of the comprehensive industrialisation of life. What is less obvious is the attitude and general outlook that perpetuate this dangerously destructive approach. It is an approach that acts contrary to the teachings of each and every one of the world’s sacred traditions, including Islam.

Revelation is a very different kind of knowing from scientific, evidence-based knowledge.

Everything in Nature is a paradox and seems to carry within itself the paradox of opposites. Curiously, this maintains the essential balance. Only human beings seem to introduce imbalance. The task then must surely be to reconnect ourselves with the wisdom found in nature; a connection which is stressed by each of the sacred traditions in their own way.

The writer C.S. Lewis once pointed out that “sometimes you do have to turn the clock back if it is telling the wrong time” – that there is nothing “progressive” about being stubborn and refusing to acknowledge that we have taken the wrong road. If we realise that we are travelling in the wrong direction, the only sensible thing to do is to admit it and retrace our steps back to where we first went wrong. As Lewis puts it, “going back can sometimes be the quickest way forward”. It is the most progressive thing we can do.

All of the mounting evidence is telling us that we are, indeed, on the wrong road, so you might think it would be wise to draw on the timeless guidance that comes from our intuitive sense of the origin of all things to which we are rooted. Nature’s rhythms, her cycles and her processes, are our guides to this uncreated, originating voice. They are our greatest teachers because they are expressions of Divine Unity. Which is why there is a profound truth in that seemingly simple, old saying of the nomads –that “the best of all Mosques is Nature herself”.

A Holy Pilgrimage
Alighting from a long, slow bus ride to the sacred source of the Ganges, Charles V. Clark had a peculiar feeling he was on the brink of an important discovery.
“Could this be the lesson we hurrying Westerners might learn from India; how to be here and now?

The Pond
If you want to witness the miracle of this normally hidden watery world, all you have to do is… nothing, writes Jeremy James.

Slowly, like a veil moving across a starlit window. The little pool reveals her cosmic treasures.

Culture of Compassion – The Dalai Lama
In a mutually interdependent world, violence has no place. 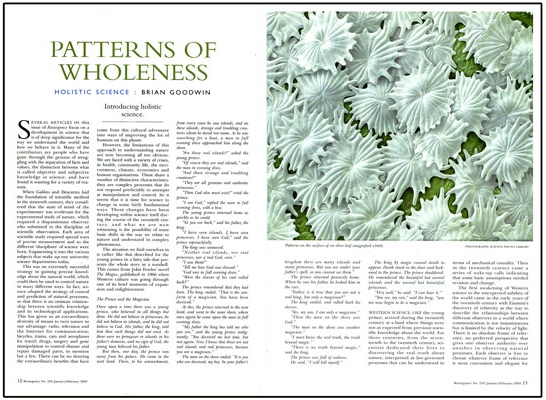 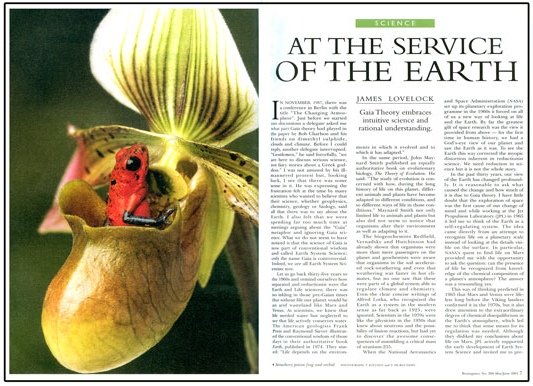 This entry was posted in Magazines. Bookmark the permalink.