Many years ago we travelled across the Sahara desert to visit the fabled town of Timbuktu. After leaving the fertile Atlas Mountains in Morocco, the terrain gradually became more rugged as we journeyed further into the desert regions of the arid Sahara.
Water was almost non-existent and the land was hard and barren. Every evening we would stop to camp just before the sun set on another day. At one point we came across the remains of a tree – still standing. It was the first resemblance of any form of vegetation we had seen for weeks. We set up camp nearby. The next morning, before we drove off into another day’s adventure, I walked over and pinned to the tree a double page spread of beautiful wave – from a surfing magazine that I carried with me on the journey. I am sure that natives, passing that way, had probably never seen the ocean. It seemed so incongruous, and yet perfect. As I scanned the horizon for three hundred and sixty degrees, there was nothing – it was flat in all directions as far as the eye could see. It was a long way from the surf, however at that moment I could feel the ocean more than ever and thought how beautiful it was to live by the sea.

There are moments that stay with us in our travels – highlights of the many journeys we have taken – some of the most memorable times for me have been in nature and certainly with trees. In Pokhara, near Kathmandu in Nepal, some of the more beautiful forests in the world can be found – with the Himalayas as a backdrop. One morning, before the sun had risen, I decided to walk into the mountains and watch the sunrise. I found myself walking along a ridge completely covered with flowers of all colours – on either side of the path there were trees laden with blossoms and before me snow peaked mountains. I sat down against one of the trees with no people or houses in sight and watched as the first golden rays of the sun touched the snow peaked mountains and slowly descended down its face. With only the call of the early morning birds and the perfume from the flowers as my companions, I marvelled at the absolute beauty of the surrounding moment and with heartfelt gratitude bowed down and gave thanks for being there. 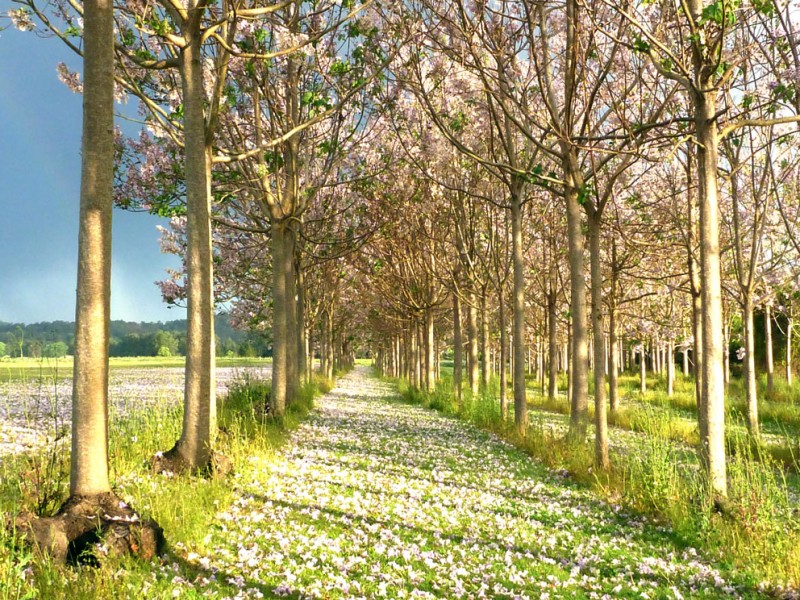 Recently in the Bellingen Valley we decided to visit a Paulownia plantation. Just as we arrived huge dark clouds that had been building during the morning overshadowed the trees and within minutes the wind was almost cyclonic. We sat in the car and watched as gusts ripped through the trees – the entire area was awash with flowers, thousands of large bell-shaped flowers raining down diagonally through the foliage. We looked at each other in amazement and raced towards the trees. The storm passed quickly and the wind subsided as we walked through a carpet of flowers. The late afternoon sun broke through, and against the dark backdrop of the storm clouds, the illuminated flowers looked like angels dancing in the avenue of trees. It was just a magic moment in time – one that will stay with us forever.

3 Responses to Meetings with Remarkable Trees