“The growth in human understanding of light has truly been a group experience combining practical observation and experimentation with the intuitive insights of psychologists, philosophers and practitioners of meditation.”

In concluding remarks, attention was once more given to advances in modern science and their spiritual implications. Earlier this year, physicists from Imperial College London stated they have worked out how to make matter from pure light and expect to do so within a year. This amazing claim is based on the formula e=mc2 which shows that mass and energy are intimately related. Atom bombs and nuclear reactors are examples of the formula working in one direction, turning matter into energy, but until now there has been no way to do the reverse, turn energy into matter. The difficulty is c2 – the speed of light squared. It accounts for the huge amounts of energy released in nuclear reactions, and the huge amount you’d need to inject to turn energy into matter.

In the US, a team led by Professor Mikhail Lukin managed to coax photons of light together to form molecules, which is different from the work of the researchers in London in that it is actually a new form of matter. Most of the known properties of light originate from the fact that photons of light are massless, and that they do not interact with each other. As one physicist said “What we have done is create a special type of medium in which photons interact with each other so strongly that they begin to act as though they have mass, and they bind together to form molecules”. The physics of what is happening in these molecules is similar to the light sabres we see in movies like Star Wars. The research may lead to progress in building a quantum computer.

Professor Lukin also said that while he and his team don’t know what it will be useful for yet, it’s a new state of matter, so they are hopeful that new applications may emerge as they and others continue to investigate these photonic molecules. He suggested that the system might one day even be used to create complex three-dimensional structures such as crystals wholly out of light. This exploration into high energy physics is a wonderful symbol of humanity’s point in evolution when it can control the relationship between light and matter. The scientific and esoteric understandings of light are bridging and no longer seem so far apart. The growth in human understanding of light has truly been a group experience combining practical observation and experimentation with the intuitive insights of psychologists, philosophers and practitioners of meditation. 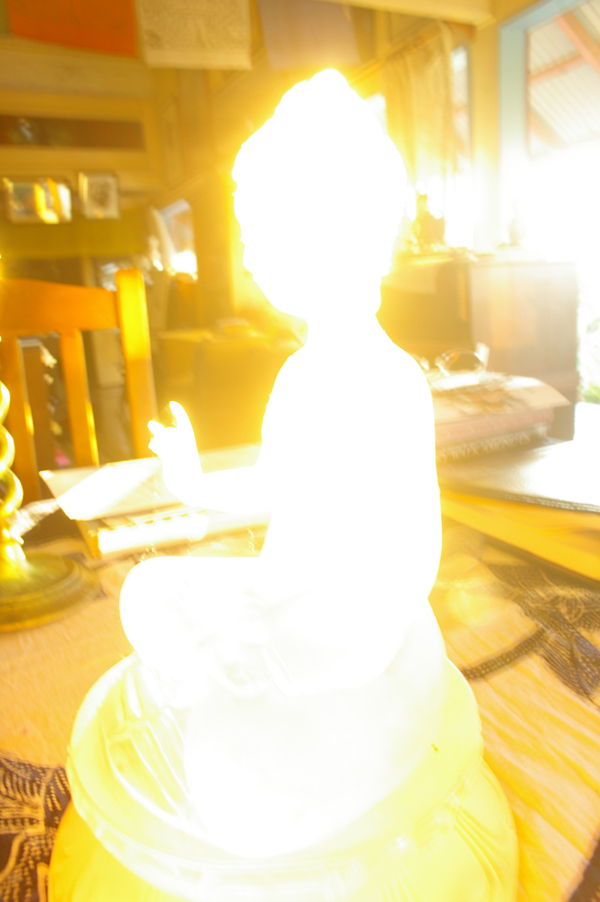 In his book Light Years Brian Clegg, a consultant who has worked for British Airways on new and innovative technology, describes how two exciting new frontiers – one which is slowing light down, and one which is speeding it up – both have the power to dramatically alter our concept of reality. The method used to slow light down is called “slow glass”, an idea arising from science fiction but now beginning to become a technological reality. This bears out the esoteric truth that anything that can be imagined can be made possible and manifested when the time and conditions are right. Based on the combined theoretical work of Bose (an Indian physicist) and Albert Einstein, a new state of matter was produced by applying intense cold to a gas until it took on the characteristics of light. Using this Bose-Einstein condensate, scientists managed to drag back the speed of light from 300,000 kilometres per second to a metre per second.

Brian Clegg proposes that if light could be slowed down to the degree that it took a year to pass through such a substance, it could then be placed in a chosen location to capture a view. Then, a year later, everything that has happened in front of the “slow glass” would be seen behind it. Shift the “glass” into a building and it would carry a year’s worth of light with it. You could have a window onto an exotic location, such as an erupting volcano, a tropical rain forest or a lunar landscape, instead of looking onto a busy street, which would be displayed for as long as it takes the remaining light to travel through the glass. For now, the difficulty is in capturing the whole scene as light enters the glass at different angles and travels at differing speeds. This has interesting correlations with our own attempts spiritually to “see whole” as the soul which sees from beginning to end, in contrast to the fragmented vision of the personality.

It has long been thought that the speed of light is a fixed, immutable, universal constant, but evidence is now accumulating that not only can it be slowed down, it can also be speeded up. Controlling the speed of light in this way will not only alter our understanding and experience of time, it will also help to liberate the concrete mind onto abstract levels of thought, and herald a new era in which humanity’s intelligence expresses life through its outstanding quality – light. As humanity moves towards this, so must it also move on and further express love and wisdom: creative force must be infused with love. The idea of “slow glass” is beautifully symbolic for a meditating group who work to absorb the light of the Divine Plan and release it into the world. In meditation the vibratory rate of the mind is stepped up and we contact light of a higher nature. By precipitating it and distributing it through mantrams, such as the Great Invocation, it is as if we are slowing down the light contacted in order to hold a vision before humanity. As we meditate we are creating a thoughtform of light substance that serves as a channel through which higher spiritual potencies can enter, ready to play their part if the opportunity is offered to them by mankind, and everything now depends upon the right action of people of goodwill. The New Group of World Servers are bringing to humanity “illumination and the attainment of the vision.”