Autumn has arrived. It’s cool and overcast and very still. I can hear the kangaroos nearby – they seem to know when I am awake.

There are perhaps fifteen in all, mostly females with a few young ones nearby. All have joeys in their pouches. I feed them macropod pellets. As the pellets fall into the tin bowls other roos come hopping into the feeding area, they have acute hearing. All up with the few wallabies there are around twenty-five kangaroos. I walk through them within arms reach, some brush up against me, I scratch a few wallabies underneath their chin – they are without fear. 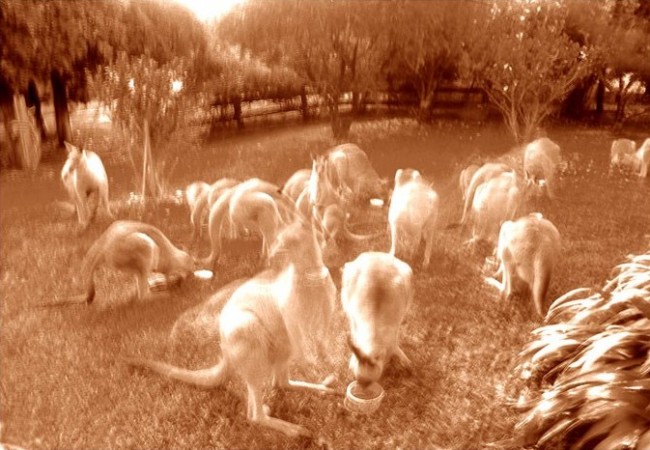 My father played in a dance band when we were young. Our family moved from Redfern to a beachside suburb near Maroubra – my two younger sisters and mother and father. The suburban brick house had a big backyard. Dad would often go to Scone for the weekend and play music in the local hall for the farmers. One time he came back with a baby kangaroo – its mother had been shot. We named the roo Ambrose. He would hang in the house and when he felt like it hopped through the opened back door and out into the yard. We always kept the back door open – often he would come bolting in and hop around the house. On winters nights he would fall over in front of the radiator until his fur would start to smoke from the heat. Often he would sleep with us and he knew how to take the lid off the biscuit tin and help himself to the biscuits. We had an FJ Holden and when we needed supplies we’d drive into the nearby village. We always took Ambrose with us and when mum and dad went shopping we’d hang out in the car with the windows down and Ambrose would poke his head out at the people passing by. Not many people in Maroubra Junction had seen a kangaroo before. It was a pretty amazing time. He became one of the family. As he started to get bigger my father was concerned and decided to take him back out into the bush and release him on a friends property. It was the saddest days of our lives. We watched the FJ drive off with Ambrose – we were crying our eyes out.

I walk around the garden and pick a few flowers. There’s a late burst of frangipani and a few yellow roses in the garden and the two tibouchina trees are just about to burst open with a profusion of indigo flowers – their colour is striking. Miniature dahlias, roses, tibouchina and even lantana (which I love, though most farmers call it a weed) adorn my desk as I write this story.

I often think how much my grandfather would love this property. He was born in Malta. When he was fourteen he stowed away on a ship bound for Australia. I think he had Phoenician blood – “Falzon” is a Phoenician name. The Phoenicians were great seafarers and traders. Maybe that’s why I have a deep connection with the ocean and spend most of my time paddling around chasing and surfing waves. I feel at home in the sea. My grandfather would take a tram from Redfern down to Coogee beach every Saturday. One day he took me with him – it was the first time I saw the Pacific Ocean. It was incredible. A beautiful day and a wide blue horizon. He would swim in the ocean baths for hours – slowly up and down the pool – he had an amazing relaxed swimming stroke. Swimming was one of his great passions along with growing flowers and playing classical music. He had a wind-up gramophone and a bust of Mozart in his ground floor tenement apartment. When he went to the ocean pool he carried his towel, perfectly rolled up, under his arm. 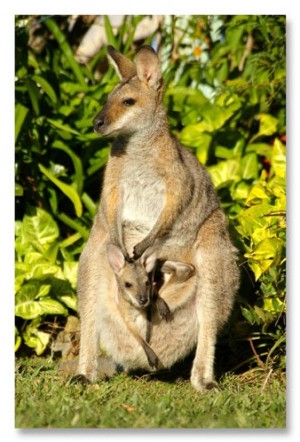 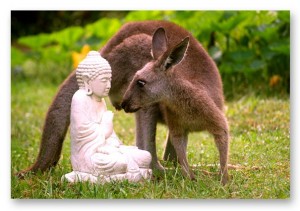 The smell of coffee permeates the kitchen as I look out the window to see a white rabbit appearing for an early morning feed. I walk outside and call him, he runs over within throwing distance and I give him some grain bread. He runs off a few feet and seemingly hides from birds or other wallabies that may want to share his bread.

I phone a friend for an early morning eyes-on surf report. It is small and glassy, dropped off in size from the last few days of perfect autumn swell. Maybe I’ll go down for a look-see when the tide fills in a little. It’s such a beautiful day.

7 Responses to A beautiful start to the day